Today's Book Recommendation is a particularly special one for me. Here's why: 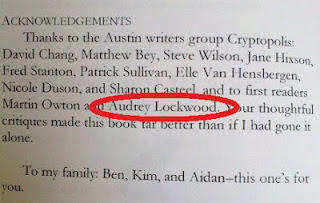 That's me! I read this book before it was a book!

Patrice Sarath was one of my mentors my very first year of ArmadilloCon. She gave me some great advice on description that changed the way I think about writing. We've stayed in touch since then, and last year Patrice honored me with a request to read The Crow God's Girl.

I read it again this past week to prepare for this post, and I found myself in the same position I had been in the first time—racing through the second half to the end, and neglecting dinner in order to finish it, even though I already knew what was going to happen.

Summary: Kate Mossland is an American girl stuck in the very foreign world of Aeritan. The only thing making her new life bearable is her engagement to her Aeritan boyfriend Colar, and the position that gives her in his great House of Terrick. Only her position isn't as secure as she once thought, and when the politics of Aeritan tear her and Colar apart, the only place left for her is among the crows—the wild, landless wanderers that plague Aeritan. With them she has a chance of making a better future—for herself, for the crows and even for Aeritan—but only if she can survive the scheming of the Houses.

What I liked: Kate goes through a beautiful transformation from a young girl struggling under the rules of a patriarchal society to a strong woman who makes her own path. I love seeing how her understanding of her new world changes, and particularly the way in which her view of the crows changes. Most of all I love how everything weaves together in the end of the book. As I said above, I couldn't put it down.

Bottom line: This book gets a place of honor on my shelf, not just because my name is in it, but because it's a book I love to read.
Posted by A. Lockwood at 1:47 PM 2 comments:

Last week my husband and I watched Unstoppable for our weekly movie night. Have you seen it? If you haven't, the main idea is that a runaway train carrying hazardous cargo is heading full-speed for a major city. If it is not stopped before it reaches the city, a sharp turn in the track at the city limits will cause it to derail and release said hazardous cargo and kill lots of people. Big stakes.

Now I'm not going to say that it was the very best movie I've ever seen, but this movie did one thing really really well:

For example, in the very beginning of the movie we see a crowd of little children visiting the train yard on a field trip. These children have one obvious purpose—to be put in danger so that we're on the edge of our seats waiting to see if they'll be okay. Looking ahead I thought, “Well, there you have it! The final showdown will be train vs. tots, and the main characters will have to come in and save the kids. Ho hum.”

Ten minutes later that very showdown happened (minus the main characters), and I realized maybe my prediction had been a bit premature. That dangerous scenario I'd been envisioning was only the first tense moment in a string of ever-increasing conflicts. I'd have only a moment of relief after each near-disaster before being presented with the next impending catastrophe.

This movie kept me hooked.

And that tension came down to a few major components:
-great pacing
-characters who had been given enough history for me to care whether they lived or died
-build-up to higher and higher stakes with increasing difficulty of resolution

As far as action movies go, this is a great one for studying how to keep an audience riveted.

If you've seen it, what did you think? Do you agree? And if you haven't seen it, what movies keep you on the edge of your seat?
Posted by A. Lockwood at 10:06 PM 5 comments:

Sometimes you can take over the world.

Or at least it feels that way. Sometimes all the things you used to think were impossible don't seem that far-fetched after all.

Like running a 5k. I never used to be a runner. I was a dancer for a good while, and that meant I was exercising, so that was quite good enough as far as I was concerned, never mind that I'd never run a mile.

But dancing costs money, whereas using the treadmill at my apartment gym does not. So I've started to run a little, and now I'm in transition to running outside, like for real. And maybe I'm not there yet, but 5k doesn't seem so impossible now.

Maybe I can do this.

And sometimes you consider something that you always believed was out of reach and you think... but why should it be? Like starting a business. After all, my grandfather started two of them. Oh, but he was a man, and despite all the powerful women blazing the way I still always believed deep down that girls don't really do that. And he was professional and, well, old, and I'm...

There was a moment this past weekend when that occurred to me. I haven't been a kid for years, but somehow, in some of the dark corners of my mind, I'd never quite made the jump to adult. Until now. And suddenly I looked at the world and thought to myself, “Why not me?”

Not that I'm going to drop everything and start some bold new endeavor just because, but my mentality shifted just enough to let me see what the world could look like if I'd only stop being my own worst enemy. It was beautiful.

Sometimes, directly on the heels of empowerment, comes the dose of reality. Less than 24 hours after my beautiful epiphany everything started to go a little bit wrong.

I said something, a small thing, that was perfectly innocent. But I realized a minute later that it could have been taken the wrong way, and more people than myself might have been affected, and by then it was too late to take it back.

I had to make a phone call, and I got the voice mail and left a message, and it was one of the most convoluted messages I've ever sent. It was awkward and all over the place and I felt like a disaster.

People who are “with it” aren't people who make messes. Are they?

Then I tried to write, but the words wouldn't come (and I took half an hour agonizing over the ending of a chapter before remembering I was only on the first draft), and I wondered if I'd ever get my head on straight, and I complained on Twitter, which I always tell myself I should never do but then do anyway.

And then everything in the world decided it needed my attention. Emails, errands, appointments. One doesn't take over the world by... (well I was going to say “by endless trips to the bank,” but maybe that is how one takes over the world). By picking up graduation cards, let's say. What's more, I did all this in shorts and a tank top, the first two things I pulled out of my unprofessional closet. Not exactly a power suit.

Sometimes, no matter how hard you try to keep it together, you end up a little bit messy.

But maybe that's ok. Maybe real accomplishment isn't just about inspiration and determination but about working through the messes instead of fretting over them. And maybe “keeping it together” isn't as much about perfectionism as it is about attitude.

So what's that mean? This all comes down to a net sum of... what? Have I gained anything by going through the high and the low?

That's it? An abrupt little platitude?

And when I'm sitting in front of the computer screen, fighting whatever battle I'm facing, close my eyes, count to ten, and take the next step.

My last post is a bit of a spoiler for this one, but I'll go ahead with it anyway.

While I was in New York I went to the Met, and in the special exhibit there I saw this piece:

Take a wild guess—who do you think drew this? (I'll tell you in a moment.)

If I didn't already know, I'd never be able to guess. In person this drawing is so life-like. The eyes and the mouth seem real. I was impressed with how well the face was captured. I felt like I knew this boy.

In order to create this piece, the artist had to have sound technique. None of the lines are haphazard or out of place. The drawing took real skill, attention to detail, and a solid foundation in the rules of composition.

This piece was drawn by Pablo Picasso. Does that surprise you? I was certainly surprised.

When I think of Picasso, I think of the artistic absurdity of Cubism. I think of an art form that breaks all kinds of rules in order to create something new that had never been done before.

But as I stood in front of this drawing, Head of a Boy, from 1905, I realized that Picasso would never have been able to break all those rules successfully if he hadn't known how to follow them to begin with. So it is with any art.

And maybe that's a lesson that most of you already know and have moved beyond. I know that for me, however, there's a temptation to dive straight into the chaos without first becoming familiar with order. Here's an example:

When I was in middle school I had this thought one Saturday morning of “Wouldn't it be cool if I could write a conversation between several characters in which the personalities and speaking habits of each of the characters are so distinct that the dialog can make sense without tags?” So I tried it. I wrote a page-long conversation with a happy character, a grumpy character, some others (Sleepy, Doc and Bashful, maybe?) and excitedly took this page to my mother to see if she could distinguish the various voices without any tags. You can probably guess what happened. She couldn't. She was completely confused. I was completely crushed.

I hadn't learned the rules yet. I didn't understand the subtleties of tagging and voice and dialog. I didn't know why tagging and distinctive voices were both important. So I was going in a great direction in one sense—trying to make very clear characters—but diving straight off a cliff in another sense.

So what's the take-away in all of this? For me it's that there's always another layer of subtlety. I will always have to keep studying and developing my instinct for the rules and why they work. Because the more I understand the foundation behind the rules, the more I can stretch myself to create something new.

YA fans: have you seen this yet?! http://mundiemoms.blogspot.com/2012/06/cover-reveal-archived-by-victoria.html

This is the cover and blurb for Victoria Schwab's upcoming book, The Archived. It sounds absolutely amazing, and it's one of the books I'm really looking forward to next year!

Any upcoming books you're looking ahead toward?
Posted by A. Lockwood at 10:24 AM 2 comments: