Book Review: The Thorn of Dentonhill

So my friend Marshall's debut, The Thorn of Dentonhill, came out last week. I pre-ordered it, but I had no idea what to expect since I'd never read any of his writing.

It's a really fun book, guys. And I'm not just saying that because he's my friend and I'm supposed to be nice. I absolutely enjoyed this story.

Here's what it's about: 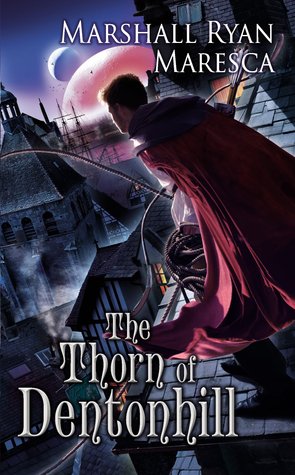 So there's this mage named Veranix Calbert (I know, crazy name, but don't let that dissuade you!) who spends his nights trying to bring down the crime boss who killed his father.

One of his nightly excursions pays off, and he comes across the time and place for a "delivery" that he assumes is a drug shipment. Only when he goes to bust the delivery, he finds that the goods are a lot more magical in nature. Now he has an enchanted rope and cloak to help him in his quest. Awesome!

Of course he also has one ticked off crime boss on his trail who is making life difficult for the local street gangs as he assumes they can lead him to this "thorn in his side." And that's a bit of a problem, because Veranix's cousin, a gang captain, is half tempted to give him up just to stop the man from harassing his crew.

As it turns out, the amount of tension in this book is just right. I was hooked from the first scene, and at the end of every chapter I was always eager to start the next one. Some days that's all I'm really looking for in a book.

But this one has a lot more to offer. It's got adventure! excitement! heroic deeds! The magic is interesting and worked smoothly within the plot. The fight scenes were choreographed well. I'm a big fan of action stories, and this one delivered.

Marshall does a really good job of writing atypical good guys. A street gang isn't usually the place you'd look for goodness and heroism, but his characters are convincing in their roles as heroes and are even a little bit charming. As for the main character, Veranix is fun to follow. He's got his heart in the right place, and he's easy to root for. I grinned with every victory and cringed at every defeat. (And there were plenty of each.)

One of the ways the book really shines is in its world-building. If you're ever curious about ways to come up with a believable world, check out Marshall's blog. He has a lot to say about getting the details right, and it's clear from this book that he knows what he's talking about. There were some excellent tidbits sprinkled throughout the book that really added flavor to the story. While the entire book takes place between two sectors of a single city, you come away from the story feeling like you have a sense of the whole world.

My one complaint was the lack of female characters. There is one female lead who is a great character and whose friendship with Veranix is a highlight of the book. Unfortunately, all other male characters besides Veranix treat her as a sex object. And this isn't an isolated occurrence: most of the women mentioned in the book are either prostitutes or are assessed based on their desirability.

Given Veranix's behavior and attitudes, I think Marshall may have been trying to create a forward-thinking main character living in a sexist place and time. However, despite the decency of the hero, I still found the sexism to be a negative mark on an otherwise very positive and fun story.

Nevertheless, it wasn't so rampant that it spoiled the book for me. I had a wonderful time reading it, and I think anyone who enjoys a good adventure story would say the same.
Posted by A. Lockwood at 2:23 PM 3 comments:

Another Little Monster on the Way

The news is now Facebook official, so I'm ready to announce that my husband and I are expecting Baby #2 in August!

We're really happy with the timing as the kids will be about two years apart and able to grow up together. Of course that also means I'm going to be doing all those baby things again, but now with a two-year-old in tow. But hey, people do this all the time right? Deep breaths...

So last pregnancy I spent about half my time glued to the Alpha Mom Pregnancy Calendar. This time around I'm too preoccupied to worry much about how big the Little Monster is or whether it has all its toes yet.

But one thing I remember really enjoying about the Alpha Mom Calendar was the "oh yeah, this" and "new this time around" sections. So here are my equivalents:

The weird dreams. Every night is a new adventure! Also, the crazy hormones. We watched Cars for the first time with the boy while we were all sick, and I almost started crying at the end when Lightning helps out the old car. I was frantically trying to GET A GRIP before my husband noticed and laughed at me.

Fortunately the dreams and hormones have not conspired against me to make me cry in my sleep. (Do your dreams ever make you cry? Mine do sometimes. But not the ones you'd expect, where people die or awful things happen. Those just wake me up cold and shaking. No, I only cry in dreams when someone is mad at me...)

And then there's the complete exhaustion striking at inconvenient times. Especially mid-afternoon on a sunny day when the boy's asleep and I'm in the middle of reading my research books and I hit one of the more soporific sections... zzzzzzzzzzz.

New This Time Around

The nausea. Oh, the nausea. I mean, I had it last time, but it was not like this. ("Morning sickness" is a completely inaccurate term, by the way. Morning is about the only time I feel fine.) I had to resort to taking nausea pills. But only the absolute lowest dose I could stand, because wow are they expensive! I'm even wearing sea bands just trying to take the edge off. Remember when I said I was eating ice cream every day? Yeah, that's because at the end of the day the only thing that makes me feel better is my little cup of heaven.

And then there's illness on top of that. See, I've been sick while pregnant. Went through two bad colds the first time around. And I've been sick with a toddler before. But only now have I finally experienced being sick with a toddler while pregnant. Anybody who can come up with a pregnancy-safe decongestant in the next couple weeks will have my eternal gratitude, because given the rate of illness in our house over the past few months, I'm sure we'll be in for another cold very soon.


And that's that. Despite the nausea and exhaustion and inability to take real medicine I'm actually quite happy. I'm looking forward to being a "mom of two." It'll be nice to have a little person who can't run away when I snuggle them again. In the meantime, I'm just glad that this trimester is almost done.
Posted by A. Lockwood at 2:27 PM No comments: