Ten books that "have stayed with you the longest or have changed you in some way." My friend Eileen tagged me for this on Facebook, and I'm not having an easy time of it picking my ten.

It's sort of like asking me to tell my life story in ten sentences. Birth, marriage, the birth of my son--these are obvious choices. But do I go with my first job or the first time I traveled out of the country? What about that time I danced until my toenails fell off and then kept dancing anyway, or the year I went to the international science fair? You know, come to think of it, birth is kind of an obvious addition to the list... maybe I could get away with cutting it.

That's how I feel picking out ten books, so if I fudge it in a few places, please forgive me.

1. The Lord of the Rings & The Chronicles of Narnia

Why? These are the equivalent of "birth" in the analogy above. I'll never forget my dad reading the Battle of Helm's Deep and shouting "KHAZAD AI-MENU" at the top of his voice. Or how, after my mom read Narnia to me, I pretended my bathroom door could take me there. (The swirls in the wood of the door looked a little like a face.)

These are the books that made me a reader, and while they seem so obvious I wish I could cut them to make more room, I wouldn't really be here without them.

Why? I never fell in love with a fictional world as much as I did with the wizard world. It was a revelation. I wanted to live there. Barring that, I wanted to create other worlds that made people feel the way Harry Potter made me feel. These are the books that made me a writer.

Why? The psychology of it really resonated with me. My first real attempts at writing were very derivative of this book.

Why? It's one of the few books that gets better every time I read it. The characters stay with me. (And, I admit, the creepy warren does too.)

Why? It's the only book I've re-read immediately after reading. I've read a lot of books that made me sad or made me laugh or even a combination of the two. But I never read one as whimsical as this. It fit the mood of my life so perfectly that I wanted to stay in it longer. Plus, Sophie's magic is precisely the sort I always wished for whenever someone asked me what my superpower would be, were I lucky enough to have one.

Why? Perhaps it was because the main character was a linguist, and at the time I was studying linguistics. Perhaps it was the mix of horror and compassion at the end of the book. It hooked me, and then it tasered me in the feels.

Why? Great series, but there's one particular scene that stands out to me. It digs into the relationship between the two central characters, and with a single sentence BOOM! emotional fallout.

Why? It's one of the few books that actually has a recognizable influence on how I live. Sure, every book changes the mind in some way, but this one made me conscious of the change. It helped me to look at areas of my life where I'm wasting my time and think more critically about them. Also, it had the most bittersweet ending...

Why? Because it is funny and clever and doesn't take itself too seriously.


Aaaaand now I want to go back and read all of these again. Oops.
Posted by A. Lockwood at 1:40 PM No comments: 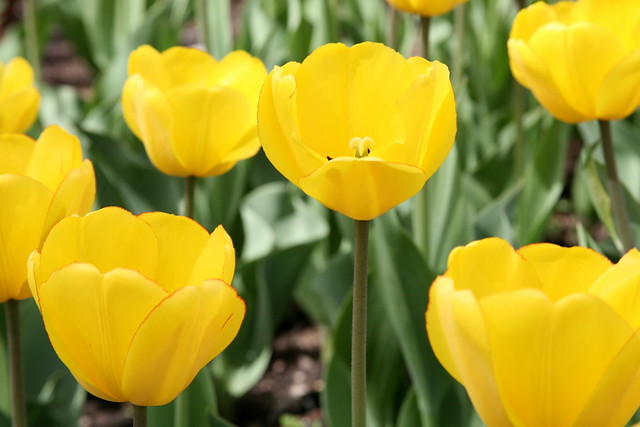 [This post brought to you by: "Eeeeeee, tulips!" aka: "I have a shiny new book idea, but I can't work on it yet, so here's some research thinly disguised as a blog post."]
Posted by A. Lockwood at 8:00 AM No comments:

A Matter of Degree

But that wasn't always the plan. When I started out in college I had no idea what I wanted to do. I studied a whole bunch of math because I was good at it, and when the major I was hoping for fell through, the easiest alternative was to fall back on a math major. I didn't realize I wanted to be a writer until my senior year.

Sometimes I wonder: if I had known then what I know now, what would I have chosen to study?

So, just for fun, here's a (not very well thought out) guide to majoring in "I want to be a fantasy writer."

1. Take lots of English classes. Don't bother taking too many English classes. Unless they sound really interesting, like Beowulf. (Have I ever mentioned I've considered adopting a really ugly cat and naming it Grendel?) Instead, read a lot of fantasy in whatever free time you get.

2. Caveat: take lots of Linguistics. I only really understood English after I studied lots of other languages. (And I do love diagramming sentences. *sigh*)

3. Throw in a good bit of Anthropology. Roll a die to see which courses you get--you can hardly go wrong.

3a. Take an Anthropology of Music class. Music is a kind of magic, right? Decide you would rather be a musician. Drop everything, take piano lessons and become a composer.

3b. Take an Anthropology of Food class. (After all, people love reading long descriptions of every single meal your characters eat, down to the minute details of preparation.) Realize you'll probably be cooking for the rest of your life, so you might as well be good at it. Enroll in culinary school instead.

4. Take a Mythology class for inspiration. Add in some Military Science if you plan to have any warfare in your books.

5a. Contemporary. Take some introductory Biology, Chemistry and Astronomy. You can't break science with magic until you know how it works!

5b. Historical. Take a bunch of Medieval Studies classes. Come to the conclusion that there are enough Medieval Fantasy stories in the world, and that it was a rather brutish time period anyway. Take several History courses from multiple eras all over the world instead. You'll probably not hit on the one era you end up wanting to write about, but at least you'll know how to do research!

5c. Other-world. Take Economics. Geology. Political Science. Religion. A bit more Anthropology for good measure. Fight the disappointment that slowly dawns on you as you realize no world you design will ever be quite as real as the real world.

6. Add in some Psychology if you still have room for it.

7. Succumb to burn-out. Remember that you used to be so good at math. Wonder if you still might be able to make a career out of it somehow...

In retrospect, maybe my studies, unconventional as they were for a writer, set me along precisely the right path in the end.
Posted by A. Lockwood at 2:22 PM No comments: