About a year ago, my friend Paul Shortt released his first novel, Locked Within. I participated in his blog tour then, and this year I have the pleasure of doing the same for Locked Within's sequel, Silent Oath. Today I have Paul here to talk about his experience with writing a series.

As I’ve said before on this tour, I’d much rather read a series than a standalone novel. There’s so much scope for varied storylines and character development, that I always find I connect more with characters once I know there’s more to read ahead.

Of course, writing a series presents its own challenges.

The obvious challenge is working out a story for your sequel. It’s got to be different from the first, but not so out of left field that it no longer feels like it belongs in the series. But in getting through this stage, you soon realise that figuring out a plot was the easiest part of the whole process.

You see, it’s not enough to just come up with a halfway decent plotline. You also want to work out how your characters grow and develop. How their world has changed due to their actions in the previous book. How the events of the new book will set up events for the next.

Unless you’re writing a series of standalone novels that just feature the same characters, like a mystery writer may do at times, you’re better off considering the series itself as a single story. That way, you can be sure that the series will retain a cohesive arc, and the characters can all grow together naturally.

Of course, sometimes you don’t expect to continue a story past one book. Or, like me, you end up re-writing the next book in such a way that you completely overhaul your previous ideas. In these instances, you need to go back to the previous book(s) and really look at the theme and tone, to see what can carry over most naturally. That’s the key, you see. Making sure each installment flows naturally from the last.

The Locked Within Trilogy started out life as a planned 6-book series. I’m not sure why I figured 6 books was the ideal length. I wanted a long series, but I was afraid of the books running on and losing steam. So I put an arbitrary cap on how long I would allow the series to become. In the end, however, I change it to a much more manageable trilogy.

Which brings me to the next problem often faced when writing a series. Exactly how much do you think you can say about these characters? If you commit to 5 books, but really you can only come up with 2 or 3 books’ worth of story and character development, you will damage your work by trying to stretch it further. Many authors would love to make it big writing the next super-popular series, releasing a dozen books and looking forward to offers of movie or tv series adaptations.

However in an awful lot of cases, we see readers become jaded as a series drags on, or get so emotionally invested that no ending the writer comes up with will satisfy them. The old saying still applies. Kill your darlings, even if that darling is an entire book. I did it, and I am so grateful to my publisher for it, because I know that this trilogy is far stronger than it would have been if I’d stuck to my 6-book plan.

Thanks, Paul! I know a lot of people (myself included) who are writing, or thinking of writing, a series. I'm sure we all appreciate the great comments!

If you would like to pick up Silent Oath for yourself, you can do so here.

Hope has returned to New York City. Nathan Shepherd leads a small band of dedicated fighters against the Council of Chains and the city's supernatural masters. But it's not enough. Because from the shadows of Nathan's former lives comes an old enemy, one who knows terrible secrets that Nathan has not yet remembered, secrets that could undo everything he has fought for.

Nathan's only chance to uncover the memories of his previous existence, and to conquer these new forces of evil, lies in Elena DeSantis. A woman he has fought beside in past lifetimes. A woman he has loved.

Together, Nathan and Elena are the only future the city has. 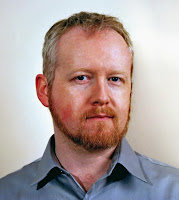 A child at heart who turned to writing and roleplaying games when there simply weren't enough action figures to play out the stories he wanted, Paul Anthony Shortt has been writing all his life. Growing up surrounded by music, film and theatre gave him a deep love of all forms of storytelling, each teaching him something new he could use. When not playing with the people in his head, he enjoys cooking and regular meet-ups with his gaming group.

Paul lives in Ireland with his wife Jen and their dogs, Pepper and Jasper. Their first child, Conor William Henry Shortt, was born on July 11th, 2011. He passed away three days later, but brought love and joy into their lives and those of their friends. The following year, Jen gave birth to twins, Amy and Erica, and is now expecting their fourth child.

Paul's first novel, Locked Within, was released on November 6th, 2012, by WiDo Publishing. Silent Oath is the second book in this urban fantasy trilogy.