Behind the Scenes: The First Draft

Some people have a favorite part of the writing process. If I do, I haven't figure out which it is yet. Is it...

Research? (Aka "Ooooh, they did what with their urine???")

Plotting? ("Now which of you lovelies wants to die in act two?")

Drafting? ("Ha ha ha, that was a great sentence. I crack myself up.")

Editing? ("Ha ha ha, that was a really terrible sentence. I crack myself up.")

Right now I'm in first draft mode.  There's a great debate* over whether it is better to plot extensively before drafting or dive right in and see where the story goes.

Used to be, I couldn't plot without getting a severe creativity block. I'd have all these wonderful ideas, and the moment I tried to put them down in a notebook they would dry up like the desiccated bones of a once-proud magnificent beastie.

Now I can't do anything without at least a basic plot. I have to know where all the key events of the story take place or I could end up walking my characters off the plank instead of sailing them to the far corners of the world.

But neither (as I used to think) does my plotting stage become more in depth with each book. True, the one I was working on before this was plotted out to the scene by scene level. But with the most recent I've given myself a bit more freedom.

In fact, my plot looks a whole lot more like this: 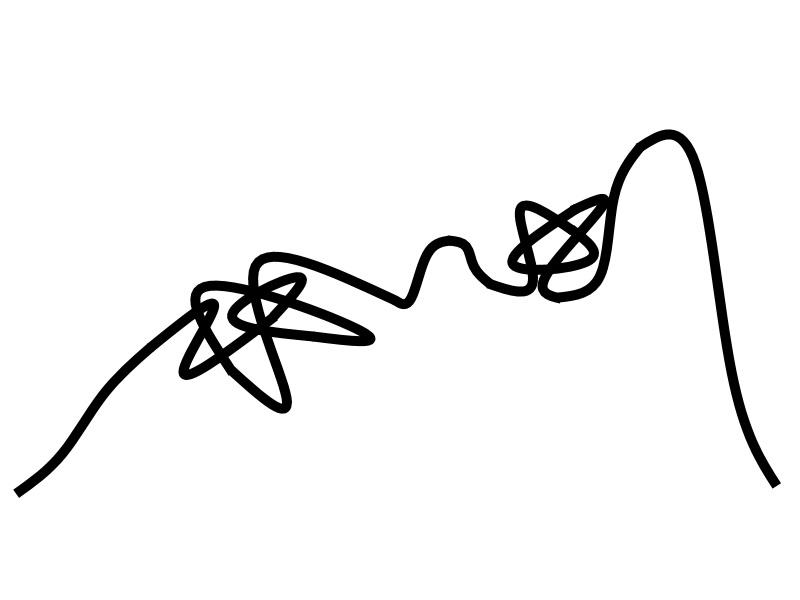 There is definitely a general shape to it overall. I know what happens in the beginning, middle and end. But in between there's a bit of room for improvisation.

Do I like this way better? I'm not sure yet. I have noticed something unusual though--this draft is turning out to be a bit longer than my first drafts tend to be. Generally my first round of editing involves a lot of added scenes. But this time? I might end up having to remove scenes altogether! And that will be a first.

I'll say this for my characters, though: they are being very obliging! The other day I realized my lack of plotting had led to a bit of a plot hole, but before I could worry too much, my character said something completely natural, right out of the blue, that took care of the whole issue. Now that's cooperation! So maybe my characters like having a bit of freedom to stretch.

Fellow writers: Are you a plotter? A pantser? Do you find some happy medium?

And everyone else: When you go into a new project, whatever it is, how much work do you put in ahead of time before you really get started?

*For real! In some circles admittance to membership requires extensive grilling regarding the methods of one's writing process.**

**No, not really. Writing process is very much a matter of individual preference.
Posted by A. Lockwood at 2:23 PM